“Angels and ministers of grace, defend us.”

“This is between me and the monster,” the assassin snarled, gripping Catherine’s jaw and boring oversized eyes into her own.

If she had doubted the existence of his soul before, his hollow gaze proved it. There was nothing human inside of him.

He withdrew his bruising hold and thrust her away so viciously, she and the baby fell half-way into the wastewater stream. Grit bit into her hand and knees and muck splashed onto her skirt and the baby’s sleeper. She scrambled up from the filthy bricks, clutching Jacob to her as he let out a shriek that dwindled into a hitching cry.

“Get moving!” the killer shouted over Jacob’s wails as he donned a miner’s lamp. 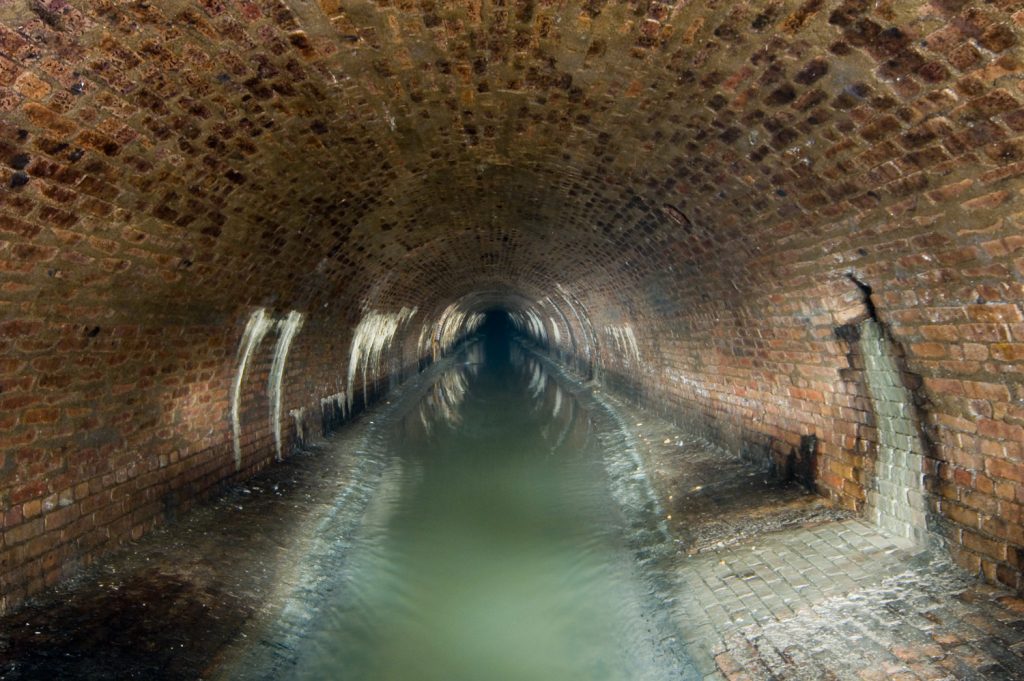 She stroked and shushed her son.

The bastard had taken them into the actual sewer tunnels, those seldom used by the Tunnel community, for obvious reasons. Dodging the stained walls as much as possible, she threaded along the edge of the runoff, walking in the direction the man pushed them towards the park. He seemed to know their home was somewhere west and south. She could try to convince him otherwise, but what would he do when he realized she’d lied?

Further away from the Hub meant no support from anyone, for her or for Vincent.

Flashes of her husband’s quelled pain phantomed across her body—a weak and aching arm, scalp throbbing, rage, fear. He was getting closer, making it harder to block the intensity of his emotions, but she couldn’t focus on it. She had to stay aware, to find the way out.

Ahead of them, the Tunnel people with no hope against a killer’s arsenal, and behind, Vincent, somewhere, still hurt, Jacob’s distress calling him to a deadly meeting.

There were no right answers.

So, she walked and … prayed.

And in answer to her prayer, she smelled him—metallic blood, loamy earth, sweat and ash—the familiar scent rising above the assaulting stench of the sewer.

The assassin didn’t seem to see him, but the child quieted at his approach. The echo of his footfalls fell in line with hers before he spoke.

She nodded in reply.

“I told you it would be you and me in the dark.”

He had, the night before Jacob was born.

He was always with her. They all were.

“I kept my promise. Did you keep yours?”

“You are doing so well, honey.” Her mother’s voice came as a whisper, seeming both far and near. “It isn’t much longer now.”

“I know,” she whispered back, hoisting the baby higher and stopping to seek the black eyes of Vincent’s Other.

“You can’t think about that now,” the Shadow commanded.

“You’re right,” she admitted, straightening and stiffening to the purpose. She had to protect the baby and keep Vincent safe. She had to keep everyone safe.

“Who are you talking to?” the assassin asked, still pressing her forward.

“They’re everywhere,” she explained. And they were, around every corner, hidden in every shadow outside his lamp’s bobbing light, whispering, gathering.

After a number more steps, he added, “But I’m not surprised. My brother did that to people.”

He did it to you.

Maybe he heard her thought, or she said it out loud, because the blonde man shoved her again, hard.

“You shouldn’t be afraid of the dead,” he growled.

No, she wasn’t. Not anymore.

“You should be frightened of the living,” he declared, as if imparting some tremendous wisdom.

He thought he was telling her something she didn’t know.

Gabriel and Moreno. Dunn and Morrissey. The men who cut her face. Those who threatened her and Vincent and the Tunnels when they thwarted their plans to hurt the innocent. Even Tom and Stephen and Elliot, who wanted her more for how she made them feel about themselves than for her.

None of them understood life any better than the baby heavy in her arms.

“Don’t worry. I know who to fear,” she replied, and kept walking.

“This will be our last time together,” the shade sighed, sounding forlorn.

“It doesn’t matter,” she answered the shadow.

The only thing that matters is saving my baby and husband and home.

“You’re wrong, Catherine,” the spirit argued. “Everything matters. Everything connects.” He motioned with a tilt of his chin towards her captor. “Ask him his name.”

Without questioning why she wanted to know, the killer responded, “Snow.”

A mad laugh burst from her.

“Why are you laughing?” He grabbed her shoulder and propelled her forward, causing her to stumble. “Is snow funny to you?”

“No.” She recovered from both the push and hysteria, finally understanding. “Snow is cold. It’s killing. I dreamt of you.”

Her dreams, Vincent’s dreams—a snowstorm of violence invading the Tunnels, penetrating winds destroying their secrecy and safety, corpses of friends strewn under ice.

“Everyone is connected, my Catherine.”

And then he went silent.

For a time, there was only the sound of footsteps. Every few hundred feet there might be a junction or a turn, but she had no idea where they led. So, they kept on the straight path, contemplating what came next, until she spoke.

“It’s my job,” Snow countered. “You shouldn’t have killed my brother.”

“No!” She spun. The numb, the shock of being taken, gave way to fury. “You don’t get to blame me for this! You don’t get to play avenging angel! The man who kidnapped me was the monster! He created an empire of evil, and you helped him. You aren’t on some noble crusade to avenge him. You are just a cog in his machine!”

He stood listening to her tirade unflinching, and, finally out of breath, she murmured, “A machine that’s broken now. You’re alone.”

“Wrong, Cathy Chandler,” he spit out her name like an accusation, as if he’d been waiting for this fight. “New York made us. New York built his business, the city you worked for, the status quo you fought for. You and your kind created us. Choke on that,” he said, unfazed by her outrage. “We were always alone. No one came to help us, so we helped ourselves.”

While her heart pounded, he scrutinized her, rolling his mouth, pulling the skin even tighter on his skull, before speaking again.

“You know Gabe would have killed your kid, eventually, with his drugs or his promises or plans. Or offed him on a whim. My brother was like that. He could kill you or make you, either way, depending on the day and how the wind blew.”

“He was incapable of love … or compassion, or decency.”

“And look where it got him.” His brother smirked.

To the heights of power in a glittering world, or dead, or both?

“But who cares, right? Who gives a crap, right? He was just some criminal.” His light bounced off every wall as he searched the area for threats, or a secret entry, or whatever he was looking for and not finding.

“This isn’t even about him anymore,” Snow stated, then bent into her space, his eyes obsidian and gleaming sharp. “This is about the endgame. And I swear to God, if you don’t find me a way into your monster’s lair, I’ll smash your baby’s head against the wall.”

Heeding the spirit, she turned and marched forward.

Creatures squeaked and skittered just out of the light as the passage took them a hundred more yards, but the angle dropped downward.

“Do you trust me, Catherine?” the spirit at her side asked.

He was brutal. He was vicious and unrelenting, but he was hers since the first moment they’d met.

“Go this way…” He pointed to an opening hidden at a juncture where the walls joined.

She took it and the killer followed. Squeezing through, she caught the flash of smile and his stiffness easing a fraction, although he still held the gun at the ready.

The cleft in the bricks opened into a somewhat dry area. She stepped into the middle of the large square space with Snow close behind. Two adult-sized pipes led out, while on the far side of the room a waterfall of runoff and sewage flowed into a canal rushing below and away from them, creating a swift-flowing river of waste. 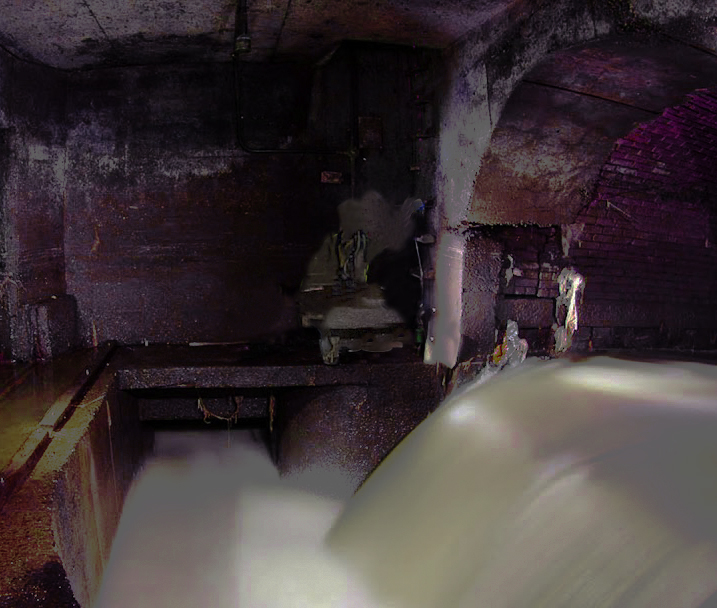 Vincent’s dark twin commanded, “When the time comes, take the right tunnel. You’ll know when. And keep the child as quiet as you can.” Then, with an appraising look that ran through respect and esteem before settling into his regular amusement, he added, “You are my queen, and this is the end gambit. Are you ready to play?”

Jon, one of the Tunnel guards, stepped out of the shadows beside the pipe they entered. He hreatened Snow with his staff, as was their usual practice with the drug addicted or other homeless who got past their barriers, but the killer didn’t hesitate. The assassin snatched Catherine backward by her blouse, holding her as a shield and shooting the sentry center mass. Jon’s body flung backwards into the corner, falling like a rag doll.

A roar came behind them. Snow whipped around.

Vincent, the real Vincent, appeared not three feet from them.

Awed by Vincent’s rage, the assassin stood immobile for a half-second before he pointed his weapon again.

She felt something snap and crumble under the thrust of her skull as she reared against her captor. He bellowed in pain, letting go of her shirt. A twist and she grabbed at his pack and rifle, pulling them down his arm, causing his next bullet to blow a hole in the wall. Vincent joined her, slashing at the killer’s back. The bag, rifle, and pistol tumbled from Snow’s grip into the shallow puddle at their feet. Catherine scrambled into the wet mud, tossing the heavy rifle and kicking the pack with all her might into the disgusting current.

Before she could turn again, another shot ricocheted through the chamber and she bolted, sheltering Jacob from the blast and concrete that rained on them as they escaped into the dark. 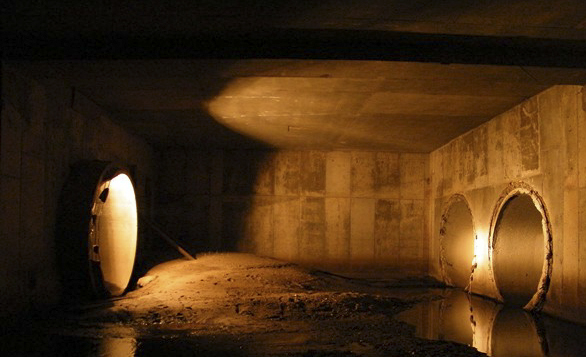