“Which way shall I flie

Which way I flie is Hell; my self am Hell;

And in the lowest deep a lower deep

Pain that warned of significant injury.

The voltage of her panic slipped past her blocking—the panic of being pursued.

Find the one that hunts them.

By the time Vincent found a ladder Above far enough away from the wreckage and the emergency crews, his thoughts had tipped from demanding instinct towards rational. He could think through the haze caused by the head wound he suffered in the explosion.

He’d recognized the threat and likely perpetrator in the partial-second staggering of detonations before he’d blacked out.

Up the ladder with a jerking, one-handed climb, jump-catching each wrung, he heaved, shoulder first against the grating above while harboring his other aching arm to his chest. Fresh air met his efforts, less polluted by the pulverized concrete damming his lungs. Cleaner air meant there’d been time for the dust and detritus to settle. Time he didn’t have.

Hounded by the sense of distance from those he loved, he swiped the dripping blood from his brow, staggered onto the sidewalk, and followed the phantom cry of his son into the city.

He’d emerged far enough from Peter’s street there was only a scattering of people rushing other places. He tried to blend into the walking traffic, which was hard in the streets of the Upper East Side with its lack of alleys and shadows, but only concerning if those could deter him from his quarry. He might be noticed. There was no way around that. But he could hide his face in his cloak, and it was busy enough he didn’t stand out too singularly to a passing police car.

The assassin’s plan … explosives, leading to untold damage, suffering … To cause a distraction, create chaos. Important to examine, but after. After he found his wife and baby. After he got them to safety.

Where? Where would be safe Above or Below?

Find them first. Worry about all else later.

Three blocks of searching, of tracking Jacob’s distress, when he discovered a dead man shot in a car. His own blood had masked the odor until he was almost next to the gore splattered window and caught the acrid, lip-curling scent of gunpowder and the too-familiar smell of violent death.

It was a horror … but it wasn’t Jacob or Catherine.

They were alive. The baby’s alarm vibrated, raked his already jumbled thoughts, while the edges of Catherine’s fear leaked through, as if she were plugging a dam with frantic hands.

She hadn’t called him to her aid. A rebuke?

A warning as when Paracelsus took her, or when he was required to eliminate the invading Tong. At the time, she’d caught him before he left and demanded he come back to her.

And beneath those words flowed others.

You are the killer, the protector. I accept that. But you must also be the man, the hunter.

Because I fear for you.

Be ruthless, but logical.

Her silent injunction had served him then. Was that what she meant now? There were no spare seconds to dwell on it. They were closer than when he began to search for them, yet moving further away, towards the Park. He turned in that direction but discerned no hint of Catherine or the baby in the blocks ahead.

The only other being around the area of the murder was a street woman emerging from under layers of blankets, coats, and newspaper. She smelled of coarse living and alarm … that did not intensify when she glimpsed him, surprisingly.

“Cat?” she croaked, craning her neck to see within his cowl without venturing from her nest.

Yes, she definitely saw him.

He ignored her question—sadly, a snub she was probably used to—then closed his eyes and concentrated on his son.

“Why you leave the Park, Cheshire Cat? You … you following Alice and her piggy?”

Vincent turned to the woman, taking in her full measure while wiping away the blood that threatened his vision.

In answer, she shakily pointed to an open manhole cover.

How had he not seen it?

He nodded again in thank you, a movement that triggered a wrenching swirl of nausea. Biting back bile, he ran to the opening in the street and descended, but with his arm still a liability, was unable to pull the heavy circle back in place behind him. He hoped no one else was following.

In the meager lamp glow cast from above, he spied footprints in the muck—two sets, a woman’s and the larger boots of a man. They continued in the direction he sensed the baby’s presence.

In the distance, he heard movement, voices. 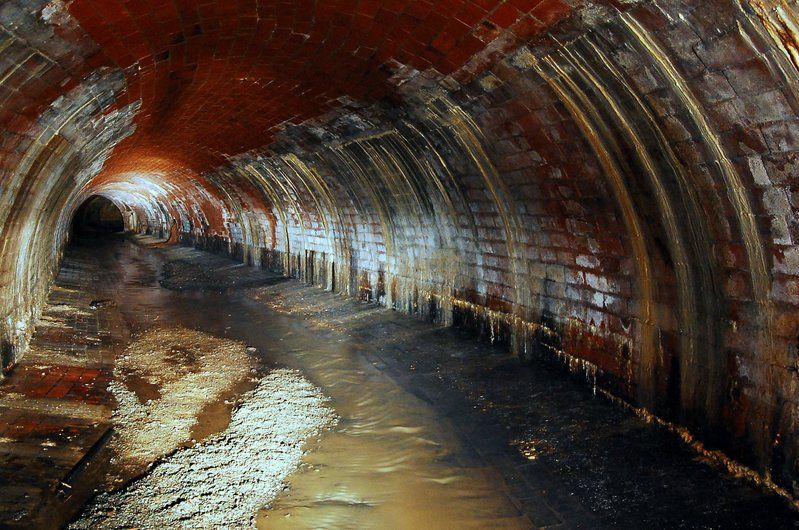 It didn’t take him long to catch them, even while careful to stay silent and hidden. Catherine walked a quarter of her usual pace, perhaps to allow time for their people to plan, to ready? Did the community even know what was happening?

The white-blonde assassin, with a miner’s lamp on his head, laden with a pack, and a rifle over his left shoulder, pushed Catherine along with a smaller, but still formidable, pistol.

“Please, let my baby live,” her voice echoed against the concrete and brick.

“Shut up,” the man commanded, pushing her harder.

“Shut up and just take me to him.”

Her armor slipped, and Vincent felt her sinking dread. The butcher had found where her loyalties bottle necked.

“Who are you talking about?” she lied.

“Don’t act stupid. You know who. He lives down here.” The man gestured around the tunnel with the gun, then pointed the muzzle at the bundled baby. “The demon that knocked you up.”

“Then I’ll kill him.” He pressed Jacob with the tip of the weapon, causing the baby to howl before he wrenched Catherine’s jaw so she had to look at him. “And then I’ll dust you. And after you, I’m gonna kill everyone you’ve ever known, just like I did the doctor—Joe Maxwell, Elliott Burch, your friend Jenny Aaronson, hell, your goddamn doorman. And I’ll find a way down here if it takes me forever, and I’ll shoot every person I find. But you can stop all that. I don’t want your kid or anybody else. Just him. This is between me and the monster.”

Vincent felt the beast within fighting to rise, to defeat his adversary, to defend his own with claws and teeth and strength …  against guns and explosives, and who knew what other terrors this killer brought into their home.

Catherine did not react or answer her captor.

Numb again, the wall containing her feelings dropped and secured back in place.

She understood. She was trying to save him, to warn him again.

He would fight, he must, even in his wounded state.

He must answer his child’s call, must defend his wife, but he could not be overwhelmed by his need to attack his enemy.

Be ruthless, but logical.

There had to be another way.