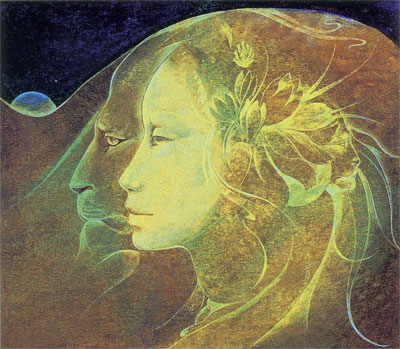 A Witch is born out of the true hungers of her time,” she said. “I was born out of New York. The things that are most wrong here summoned me. “

“You must dream, Vincent, a sasha dream, a spirit dream,” sightless but seeing eyes beseeched him, warned him.   Narcissa, the witch of nowhere, the only being who could consistently catch Vincent off guard, could be exasperating at the best of times, but now…miles to go before I sleep.

His patience for the world Below, for Father’s scolding about his health, the looks of pity from Rebecca and Olivia and the others, for the despair in Lena’s eyes, had become frighteningly short.  Even around the children he could be dismissive and out of sorts.  He was deteriorating, his snapping at Father tonight the latest expression.  He could feel the teeth of fury prepared and quick to bite if he but slipped scarcely closer to the edge. His madness lived, pushing, inching closer, ready to use anger or desperation as its means to run again.  Every day the edge sharpened, and minute-by-minute without her his sanity diminished along with hope. Only Catherine, the cause and sole cure, could hope to stave off the chaos that surrounded him.

Narcissa had caught him near the spiral stair.  She never ventured to this high a level of the home Tunnels.  He was just about to begin to search the night for Catherine; her halting accented words were almost more than his frayed patience could bear.  “You would do better searching your past than searching the city to find your woman.”

“Narcissa, I must go.  She is Above somewhere…”

“But you will never find her without a guide trooe da darkness,” she warned, and then pulled back with a blind smile, “and I have found you one, my dear boy!” She patted his arm, the way she had when he was small and she had found him a treasure in the depths of the earth.

As insane as it was, after searching for so many months without the slightest clue, without the smallest light in the dark city, he found himself wanting her help, any help. Father and the others were losing hope.  Mary, Brooke, Mark…he knew what their looks meant.  Father had even given the worst voice…

“Perhaps there is a reason for your inability to sense Catherine, for your loss of connection to her…”

It was only his darkest dreams spoken aloud, the ones he dare not give credence, but Father had allowed them air, and gotten a taste of Vincent’s fear and anger in kind.

Vincent found the beginning of expectancy, a promise in the old woman’s peculiarity.  He prayed Narcissa spoke in truth, not madness.  “I wanted to give you mine, but de would not do, oh no! De do not understand da up above city, da whites, de do not know your Cat-rine well enough,“ she chuckled,

“Narcissa, please, I do not have the time to…”

“Vincent!” she nearly shouted at him.  “You must listen to me!  It took me tree full turns of da mother moon, searching, always looking in da hidden places, but I found her.”  She smiled again at him, wonder in her voice. “She was like…,” she paused, “…a tiny candle in the dark. She will take you.  She will help you. She is so happy to do this.”

Narcissa, still holding his arm, turned him around, back towards home.  “Go home, my dear one.  You must sleep, and you must dream.  You will dream what you fear da most.  Et will allow de beast to awaken, and that will frighten even you, but da beast, it will lead you; it bites us, it changes us, but it can be good, my boy.  Et is da life giver and taker.  Et will do what et must to save what is lost.  Listen to your dreams, and you will find da truth and your woman.”  She patted his arm, and pushed him towards home.

“Narcissa…, wait, what do you mean,” he called after her as she ambled away down the tunnel, into the dark.

“Dream, Vincent…dream…” Her voice became a whisper in the dark.

Without any sign, any hint as to Catherine’s whereabouts Above, and with Father’s words stabbing, “If the worst has occurred…,” Vincent had no choice but to follow the old mystic’s words back to his chambers.

He returned to a dark chamber and did not attempt to change it.  He did not need the light.  The light encouraged visitors, and it was the last thing he wanted.   His clothes lay where he had dropped them.  His space, no longer a source of comfort, just an accommodation to catch an hour’s sleep before the dreams began, a place to wait until the safety of night to search again; less a home, more a tomb.

Of course, sleep was as elusive as his memories.  He had paced his chamber trying to recall any detail, however tiny, of his illness, before her disappearance, to try and unearth some clue, however small, as to where she could be, but all his memories of that time lived clouded in the grey haze of loss.  He looked about his chamber for an anchor.  His things, what had been spared his sickened rages, spoke little of her, and none of his illness.  Even before Narcissa’s words, he felt there must be something of that time that might lead him back to Catherine.  Yet, his journals of those days contained so much gibberish, scribbled, disjointed scrawl, signifying nothing:

So much of his past had been lost, he felt helpless, almost insensible.  Would he soon forget her very face?

He lay in his bed, unable to imagine how he would ever fall asleep. He thought of asking Father for a sleeping draught, which he knew would be granted, happily, even with his history of poor drug reactions.  Father would be relieved to not have Vincent spend his night searching, but Vincent feared that his dreams would be lost to the medicine.  It must have been near the second hour of the morning before he drifted past the random thoughts of pre-sleep into a dream world.

Back to Union
Union Chapter 2
Back to Home