[If you want to skip the smut, skip from the *** asterixis to the line of asterixis.]

Love is a war of lightning,
and two bodies ruined by a single sweetness.  – Pablo Neruda

The baby was fine.

Of course he was.   He was with Mary and Father and all the others here who cared about him, surrounded by people.

Still, it was the first thing she checked.  She had to. She nursed him, staring into his searching eyes, listening for any message on the pipes of danger, intruder, but none came.  She held Jacob’s tiny hand, stroked his head, and thought until it felt like she’d thought a hole in the ground, while the little boy, full-bellied and contented by her presence, fell asleep.

Now Rebecca was watching over him with the Tunnels and all the myriad layers and mazes of security and stone keeping him safe.

Vincent was waiting for her in his (their) chamber.  For a moment, standing in the hallway, she marveled at what had been done.  Walls were gone, the stained glass window out—she assumed, placed safely elsewhere.  Trunks were pushed to corners, the chairs and table stacked.  She knew what it was supposed to look like in the end.  Vincent had shown her Cullen’s ideas, Mouse’s musings, his own thoughts.  He’d asked for her input, but without a grounding in what was possible, she was at a loss over what to ask for.  Vincent had been forced to make the final decisions.  She understood the final plans, but she had no idea how the foreign present would become a comfortable future.  The room was sheeted, concealed and dust-covered, the furniture moved into different formations, like a land of unfamiliar ghosts.

And then she saw Vincent.

He’d changed from his dirty cloak and clothes to a cotton shirt and loose pants.  Arm bandaged, hair in damp, curled rings, he sat, gaze lowered, contemplating something.  Maybe he was thinking a hole in the ground too.

He turned as she entered, eyes catching hers, and it was being caught.  She couldn’t have moved if she wanted to.

His gaze, fierce and icy blue, held only expectation—no calm, no peace.  Out of love and instinct, she took the smallest sip of his emotions. They both warned her… and thrilled her.

Still living in the thick of the battle.

The usual sequence of events—anticipation, strike, aftermath. She’d seen them take him over, knew them herself, experienced them herself.  Once the immediate danger passed, the energy used up, came the lull, and with it regrets—rarely, rewards—but, ultimately, resolution.

With their nightmare roaming Above, no resolution could be found.

Perhaps because of that, or because of what they’d endured in the last year, he couldn’t let go, wouldn’t ease down.  Adrenaline kept him in the hunt.

He required a different prey.

Within the next breath he pulled her to him, as powerful and sovereign as he’d ever been with her.

There was no easing this fervor except to travel through it.

“Jacob’s all right,” she offered, her voice so low and deep, it matched the darkened cave.

Barely a nod in answer, then a kiss, a test of her desire, hard and demanding, only gentling on release.  She followed him back, stealing another taste, teasing his bottom lip and craving more.

She passed the test.

“I know,” he replied. Scarcely words, as if they were difficult to form.

He grabbed and dragged a large sheet.  A swift tug, and the bed was revealed.

The bed was so… obvious…

He circled her, pursuing—no other way to say it—looking for a way in, for her assent. Her weakness?  She did feel weak in the presence of this new Vincent.

She had come to know so many Vincents—the loving father, the dedicated husband, the possessive mate, the worn man, the vulnerable, the intelligent, the angry, the passionate.  He was a multifaceted crystal, a diamond—the facets of him glinting then shadowed, moving in and out of the light.  She had wanted all of them, all of him.

“Your clothes,” he said, his lips next to her ear, “take them off…”  Half growl, half breathed command. “… before I must rip them from you.”

Masculine, wantful, powerful, yet he needed her, and it was a wife’s prerogative to give.

She struggled with her blouse, then her pants, but in a moment, she’d discarded her clothing, and his soon followed.  He stood naked before her, beautiful, fulsome, shameless.

Shame killed love, denied its truth.  He had so much before.  Perhaps, danger and desire killed shame.

Together, if they trusted, they’d travel to the core of him, where shame had no place.

He gazed at her nude body, taking her in, as if his right.  It was.  She’d given him that power, but she gained in the giving.

Coiling behind her now, surrounding, he caressed her thigh, following her hip.   He seemed to be gauging, considering, breathing her in.

His fingers found her sex, dipping in, stroking, then inside, stretching, in and out.  Another test.  She hoped the slick that met his efforts told him everything he desired to know.

Her hips tried to rise into his hand as her head fell back to his chest.  Dear God, it was too good. How did he expect her to stay still?

“Don’t… move,” he repeated into her cheek.

He didn’t think he could touch her before?  But they were bonded, he knew her, felt her.  He’d been careful of his claws his whole life—pads instead of curving nails.  Two fingers now—caressing, exploring, invading—then his thumb started to rub her on the outside as well.

Eyes closed because she couldn’t look, the stimulation too much.  There was nothing she could do but gasp at nearly every stroke.

He took her to the outskirts of release before he withdrew.

She wanted to scream in protest but whispered instead.

He paused for a moment, hands on her waist.  In the next breath, he spun and lifted her, wrapping her legs around the hard muscles of his flanks while drawing her in for another claiming kiss.  In a fluid rush, he hoisted them both onto the middle of the mattress.

And then, without preamble, he penetrated her.

Empty before, now full.  So full.

“Nnaahh…” The sound escaped, halfway between surprise and acceptance.  She was so wet only satiety came from his abrupt entering.  Lord, the power of him.  Her panting came shallow and labored, his weight and actions stealing the air from her.

This is what she wanted.  The gentleman husband, the sensible man, the scholar, giving way to this being.

He lingered, rising above her, watching.

And then he thrust again.

Guilt and confusion were banished, allowing him to open their connection to everything he’d tried to hide, sharing the hunger and strength that she hadn’t dreamed possible.

Maleness radiated through the bond, the claiming, the craving to take, and take and give, and fulfill.  Before, their lovemaking had celebrated their elation at being alive together.  This intimacy, their desperation after nearly dying.  Somehow, she knew to give in and grant him complete dominance. To say yes to his possession, to let him pace them, to not fight the imperative wave, and in doing so be one with it.  The savage intensity bombarded her body and psyche until she could only succumb.

He withdrew and drove in again, pushing to the edge of her limits.   He hiked her right leg up onto his hip, causing the pleasure—almost unbearable—to shift deeper, another limit reached. Rough fur teased her flesh. His scent mixed with the summer rain evaporating on his heated skin. He engulfed her, his frame covering, his face her vision, his hair surrounding, until everything was only him.

He kept her there, on the edge, rolling his hips against her, slower than she required, in a way that shouted his dominion.

“Vincent!  Please…” she begged while he took in more and more of her. She pressed against the stone wall above to counter and meet him. Every part of her pleaded for him to speed them to release.

He hesitated, maddeningly, as if to say, are you sure? Are you ready?  There is no turning back for us.  He couldn’t say the words, he was far too gone into his primal self, but she understood on the level where they wrapped together as one.

Yes! Her heart and body promised.

He acknowledged her unspoken answer by driving in again, again, and again, quickening to a frantic pace of wild thrusts.

And for the first time while making love to him, when her orgasm crested over her, over them, she totally let go, discovered her voice, and screamed.

Before they slipped beneath sleep, he said, “I love you.”

She prayed she could soon say the same.

She only allowed sleep to drown her for twenty minutes, perhaps thirty.  Already the frozen nightmare bit at the edges of her consciousness, and now the monster haunting them had a face. 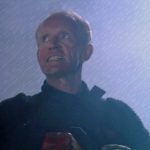 She looked into the dark, the ghost furniture wavering and shifting in the flickering candlelight, but the other half of her saw through Vincent’s eyes, saw the assassin of ice, the dead-eyed killer.

Vincent shifted from her with a gasp, fears beginning to swirl in his dreaming mind.

But that was a lie.

She would have to make a lie the truth.

He finally eased as she sent calm and tenderness to him.  When she perceived his dip into dreamlessness, she inched out of bed and gathered her clothing.

Catherine looked back only once to her husband—exquisite, wanton, and well-loved—then dressed in the corridor outside their chamber—the possibility of being seen half-naked weighed against the risk of her movement waking him.   She pushed her consciousness into that place she’d fled when Paracelsus kidnapped her, only calculation and calm.

In bare feet Catherine walked toward the nursery to grab Jacob and write the note Vincent would read when he woke, hopefully many hours from now, but she had to hurry.

She closed the bond inside her heart and composed the letter in her mind as she dashed down the halls.

I’m going to talk to Elliot.  I’m going to ask him to claim paternity of Jacob.  The agents already think he’s the father.  Elliot has resources to throw them off and security to deal with the assassin.  We helped him, now I hope he will help us.  If he sees the baby, maybe he’ll have pity on me, maybe he’ll understand.  He deserves at least some of the truth.  I have to take the chance.  He may be the only one who can untangle all this.